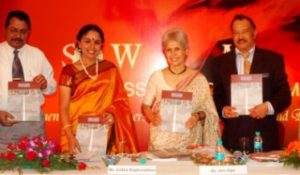 In the early and quiet morning of 8th August 2008, the ‘Power of Silence’ was unleashed. Sudha, along with other dignitaries and the Mayor of Chennai, assembled at the Marina Beach, Chennai and observed 8 minutes of silence from 08:00:08 am to 08:08:08 am, listening only to the sounds of nature. This event was organized by the Global Carnatic Music Association in collaboration with Sri Krishna Sweets and Exnora International, in a move to bring in an awakening on the effects of global warming. This was a prelude to the grand finale of the ‘88888 lights out campaign’ at 8 p.m. at Arihant Towers in Koyembedu.