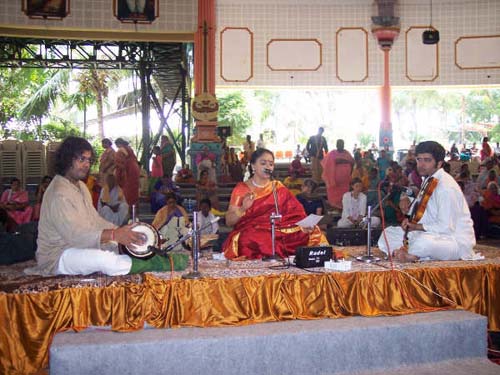 Sudha’s fans and rasikas had missed her during Navaratri last year as she was away on an extended tour to the US. Not to disappoint them this time, Sudha had taken special care to ensure that she was able to sing in all those pivotal areas of the city, and outside of it, where her fans could come and enjoy the fare.

And what a fare it was….The ‘pilgrimage’ began on the very first day of Navaratri (October 12) with a morning concert at the Sri Ganapati Sachchidananda Ashram at Mysore. An apt beginning indeed, Mysore being the hub for Dusshera! Sudha sang a few of the Navavarna kritis composed by Muthuswamy Dikshitar and Swami Sri Ganapati Sachchidananda. The concert ended with Swami’s bhajans, which had the audience joining in the musical fete. Fan mails were proof enough to endorse that the Navaratri started off with the right note. The Devi was beckoned….to descend to earth and spread her divinity for prosperity and glory.

Back to Chennai, the second day (October 13) was at the Ramakrishna Mission, Mylapore. In the festive surroundings, amidst a tall line of golu steps filled with multicolored dolls signifying an entire gamut of stories, the learned Heads of the Mission and her dear rasikas, Sudha gave a memorable start to the festival…an elaborate Shamukhapriya, a sloka from the Soundarya Lahiri, followed by one of Dikshitar’s Navavarna kritis in Ananda bhairavi and all time favorites such as Hari smarane maado, Kurai ondrum illai and Sri charka raja contributed to a bhakti filled evening.

The third day of Navaratri (October 14) saw Sudha at the Shringeri Bharathi Vidyashram, T. Nagar, Chennai. The Goddess Sharada Devi was simply glowing – bright and beautiful, casting an aura on the dais to bless the musicians. Sudha began the recital immersed in bhakti and her devotion and fervor slowly spread to the rasikas who were seated all around, unmindful of the cacophony behind, by the continous stream of devotees pouring in large numbers, to catch a glimpse of the beautiful goddess and then settling down to soak in as much of the evening’s melodies. Unnaiyallal, Raaga sudharasa, Baaro krishnayya, Thamburi meetidhava…simply mesmerizing. The concert concluded with Sudha singing a kriti on the goddess Sharada Devi, it culminating in a fast paced bhajan, gathering tempo as the rasikas joined, in rapture, reflecting the mood of the evening. The orchestra-less solo Karunai deivame karpagame, post the aarthi to Goddess Sharada Devi, soared and reached into the hearts of the devotees, its strong not es quieting the atmosphere into near pin drop silence.

Over to Coimbatore on the fifth day of Navaratri (October 16). It was a grand recital at the beautiful Kamakshi Amman Temple. Naan oru vilayatu bommaiya, Nalinakanthimathi, Alai paayuthe, Theeratha vilayattu pillai…all exclusively for the Coimbatore rasikas. The piece de resistance of the evening was a slokam from Lakshmi ashtothram, followed by Hiranmayeem in raga Lalitha. The Nattakurinji was dealt with elaborately followed by Swati Tirunal’s Maamavasada.

It was the sixth day of the festival (October 17) and Sudha was back in Chennai at the Paathala Ponniamman Thirukovil at Purasawalkam. Gauging the needs and wants of her audience, Sudha takes care to cater to their expectations, though at times she is alleged for repeating her numbers. It is indeed a fine balance between the ‘want’ and the ‘need’! While she wants to offer a variety fare, during most times, she has to cater to the needs of her audience. This evening saw her offer a bouquet of listeners’ choice….all that they wanted, that they clapped and sang in unison – Devi kritis (Devi neeye thunai), Bho shambo, Katrinile varum geetham, Chinanchiru kiliye, Brahmam okkate, Bhagyadha lakshmi baaramma and Kanda naal.

And the cock crowed in the evening…..!!

However, the highlight of the evening was these two temple birds (cocks) who were mute spectators to the concert, sitting atop the little shrine by the side of the audience. While the concert was in full swing, they suddenly chose to crow cock–a-doodle doo, whenever Sudha decided to pause in between songs, (at 8 pm in the evening!), as though in acknowledgement and appreciation, much to the amusement of all. A smiling Sudha could not help declaring “…Sevalum isaiyai rasikirathu pola…they seem to be inspired by the music as well!” God comes in myriad forms, indeed!

The last destination in Sudha’s religious tour was the Garbarakshambika Temple, Thirukaruhavoor (October 20). The town was splashed with posters all over, heralding her arrival. Two songs on the Devi (Sudha has launched a cd of compilations on Goddess Garbarakshambika) and Akhilandeeswari were the main pieces – a fitting finale to the divine tour!

The navaratri pilgrimage ended in all glory with Sudha having a good darshan of the Goddess and praying to Her for the welfare, health and happiness of all those around and that peace fill the world!