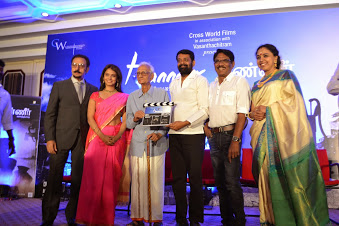 While Carnatic music is her chosen path and she is completely immersed in regaling with soulful and pristine music, Sudha has also begun to explore other realms.

Her foray into film music happened by accident, when she was actually submerged in her core career path of classical music, continuing to explore, to seek greater vistas. After some soul searching and convincing herself that she could create her own unique style while she diversified, she gently tread on this different path.

Virtually choosing the songs, in her own intuitive and assessing fashion, Sudha has done some very memorable numbers in Tamil and Malayalam. You would be in for a surprise if you thought that all her film numbers were carnatic based. “Move over ye purists, here I come to regale in the colors of the rainbow” would be an ideal summation of one’s thoughts when one listens to the very offbeat and unique numbers rendered by Sudha.

Narthaki (2011)
A classical offering with Unnikrishnan under the baton of young music director GV Prakash.
(Click here for audio clips )

Mandhira Punnagai (2010)
A classical offering by Shri Vidyasagar from the film Mandhira Punnagai which is already topping the charts. Sudha had missed an opportunity earlier to work with Shri.Vidyasagar on account of prior commitments but destiny ensured they partnered again to give a delightful number.
(Click here for audio clips)

Thavam (2007)
Sudha has always been impressed with Music Director Immam’s peppy, lively and melodious compositions.The film Thavam has one number where Sudha is accompanied by Mahalakshmi Iyer.
(Click here for audio clips )

Sattham Podathey (2007)
The most recent venture, a film by Vasanth, which again reflects the innovation of the director and deft handling of the music by Yuvan Shankar! Absolutely and astonishingly different!
(Click here for audio clips )

Morning Raaga (2004)
An Indian English movie by Sri. Raghavendra Rao, where Sudha sings for Shabana Azmi. While both the numbers ‘Maathe malayadhwaja’ and ‘Thaaye Yashodha’ are purely carnatic, Amit Heri had blended fusion so well, that the net result is simply awesome! Sudha’s fans from all over the world have told her that it is indeed the piece de resistance in the movie!
(Click here for audio clips )

Runway (2004)
Listen to the song and you would want to know who this peppy singer is, so full of joi de vivre. Not for an inkling of a moment would you relate it to Sudha. Such is the versatility of the singer – an entirely different avatar of music altogether.
(Click here for audio clips )

Ivan (2002)
Ivan’ by the versatile Parthiban has two classical numbers rendered by Sudha, composed by the Maestro, Shri.Ilayaraja. This was so as the heroine in the film played the role of a carnatic musician and thus the choice.
(Click here for audio clips )