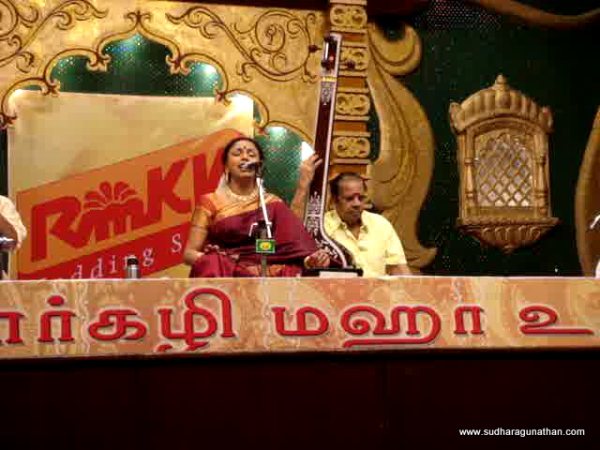 The month of December in Chennai is always so special and so close to the heart. The misty mornings unleash a sense of euphoria…. purity in the air, wafting music from the surrounding temples, dew drops shimmering on the leaves reminding one of the wonders of the Lord’s creations, untouched by human invasions and innovations…and of course the spate of concerts all through the day, bringing each day to a musical closure.

For the rasikas of Sudha, it was a month of concert planning and expectations of the fares she had to offer. For Sudha herself, it was month which brought her another step closer to her beloved fans and rasikas of her music, their appreciation, affection and support completely fuelling her passion to perform, motivating her and giving her all the energy to sail through the month successfully.

The month began with concerts at Hyderabad and Pondycherry. Sudha never ceases to be amazed at the warm reciprocations from the audience during her visits outside of Chennai, their love for carnatic music and their involvement during the concert. Performing at the Meenakshi College, Chennai for the student community is something that Sudha thoroughly enjoys and this year was no different.

The thematic Jaya TV concert Marghazhi Mahotsavam had some fine Oothukkadu numbers rendered which had the audience completely involved. There was also a discussion with rasikas, ‘Samvada’, organized by Sampradaya. A total of thirteen concerts in key venues across the city of Chennai during Marghazhi, culminating in the traditional Tiruvaiyaru Thyagaraja Aradhana on Jan 5, 2010, saw a very satisfied Sudha at the end of it all. Many new inclusions of kritis, RTPs and themes summed up a mellifluous Marghazhi.

Sudha moves on to herald the new year 2010, working on her goals and missions for the cause of music and for her Samudhaaya Foundation, wishing her rasikas the very best for the year ahead and conveying her gratitude for the continued source of energy and support provided to her all through.