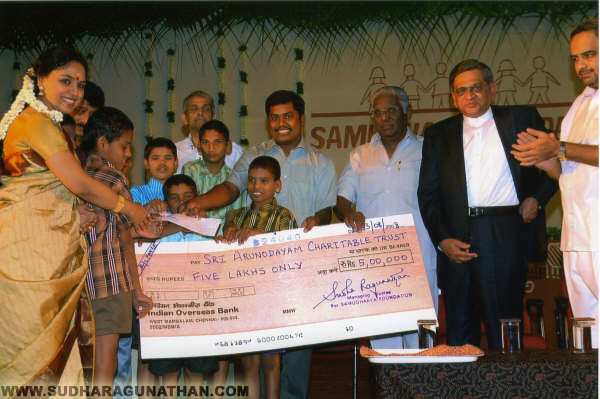 Sudha’s activities in August were multifarious and gave her great satisfaction and fulfillment at the end of each event. She indeed would like to share her experiences with her dear rasikas.

The distinguished guests discussed at length about the success women had achieved in the field of management and how they continued to aspire to achieve greater heights. Anu Aga, in her opening speech said that it was important to balance professional responsibilities and personal life and emphasized on ‘Vipasana’ which is the art of living. Sudha Ragunathan talked about her journey to becoming a maestro in classical music. She discussed the challenges faced and how she won over them. Hemu Ramaiah opined that it is important to think out-of-the-box to reach ‘the other side’ and achieve success. Mridula Ramesh talked about four success enablers for women, namely role models, proving early competence in a language known by competitors, courage, and family support.

A 100-hour marathon concert was organized from July 31st to 4th August 2008 at the Thyagaraja Sangeetha Vidwat Samajam, Chennai. About 150 musicians participated in the concert which was a tribute to the doyen of Carnatic music Shri. Semmangudi Srinivasa Iyer (whose birth centenary fell on 25th of July). It was also a prayer on behalf of all musicians for a cause – sensitizing the environment against global warming. The concert was held under the auspices of the Global Carnatic Music Association, of which Sudha Ragunathan is the co-founder, along with musician Shashikiran. Sudha gave a fitting finale to the marathon concert with her concluding performance on 4th August, which had the venue thronging with music lovers and vidwats.

Power of Silence’
In the early and quiet morning of 8th August 2008, the ‘Power of Silence’ was unleashed. Sudha, along with other dignitaries and the Mayor of Chennai, assembled at the Marina Beach, Chennai and observed 8 minutes of silence from 08:00:08 am to 08:08:08 am, listening only to the sounds of nature. This event was organized by the Global Carnatic Music Association in collaboration with Sri Krishna Sweets and Exnora International, in a move to bring in an awakening on the effects of global warming. This was a prelude to the grand finale of the ‘88888 lights out campaign’ at 8 p.m. at Arihant Towers in Koyembedu.

“Feeling gratitude and not expressing it is like wrapping a present and not giving it” – Sarah Caldwell.

Sudha’s fans have always been an integral part of her life. She is in constant dialogue with them – over the phone, through mails, lightning interactions during her concerts and many other modes of communication. She believes that this mutually beneficial relationship is important in her mission to sing and spread this beautiful gift of music that the Almighty has bestowed upon her, across the globe, emanating from her own home town of Chennai and traversing to whichever part of the world the Lord chooses to take her to!

Despite her hectic schedules, Sudha makes an earnest effort to interact with her dear fans. But this time, she wanted to exclusively relegate some time – to converse, to express her gratitude for the roles they have played in her life, the appreciation and the encouragement that they have expressed for her music during each of her concerts and for having been with her all through. Sudha was also keen to answer questions that may have been weighing on their minds.

Thus was launched the first face to face interaction with Sudha, exclusively for her fans, on 16th August, 2008. The venue was Hotel Shabari, Chennai. Credit for the entire co-ordination and organization of the meet goes to Shri. Pyarilal and Smt. Jayanthi Srikanth, who took complete charge, right from beginning the initial discussion on the context of the Meet, seeking dates from Sudha, announcing of the Meet to the rest of the fan community, the collating of the guest list and short listing the invitees. It was Sudha’s desire to have a compact group so that the essence of the meet would not get diluted and there would be a complete focus on the discussions and interactions. However, she also conveys that there would be many more such meets where everyone would have an opportunity to participate and interact – that brought a smile to the disappointed faces who could not be accommodated on the 16th August.

The audience was of varied profiles, right from the most senior of music lovers, to IT professionals and those who were in Chennai on a holiday and who were delighted at the opportunity. The meet lasted for over 3 hours and then the group dispersed post dinner.

Details of the Meet and photographs will be up for viewing in Sudha’s fan site.(www.sudharagunathanfans.com)

Have a Heart for Little Hearts

Details of the function and the next steps of taking the initiative forward will feature in the section Samudhaaya Foundation, of this website.