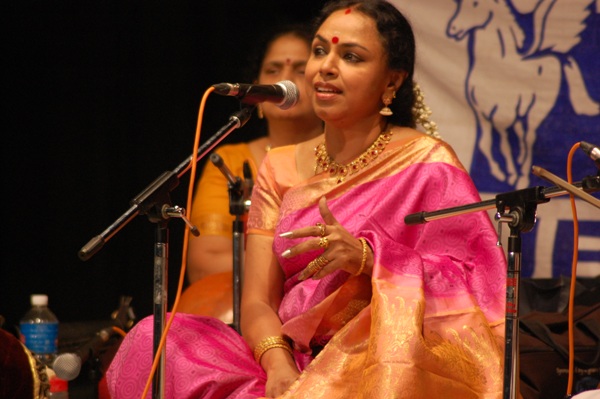 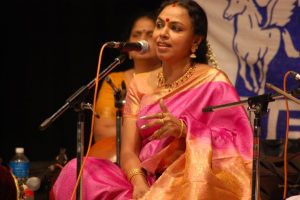 The flavors of August are myriad….Music is truly a universal language and the joy of reaching out through music is what gives satisfaction and contentment for any artist who pursues his or her mission with focus. Sudha is gifted to belong to that selfless group and her experiences across the varied section of audience demystifies any enigma that may be associated with music or the musicians….so free, so abundant, so ethereal and so satisfying.

August’s sojourn began with a concert during the concluding day (5th August) of the Indraprastha Sangeet Samaroh’s three day festival (conducted by Sahitya Kala Parishad, the cultural wing of Govt. of National Capital Territory of Delhi. She sang to a large, knowledgeable audience, who were predominantly rasikas of Hindustani music, in the august presence of Ms. Sheila Dikshit, Chief Minister of Delhi, who sat through the entire concert and later conveyed her personal appreciation, with affection.

For Sudha, Bengalooru is like hometown. The adoration from the audience towards her and her music always leaves her overwhelmed. Perfectly at ease with Thygaraja, Purandaradasa and Bharathiyar, the audience understands, appreciates and follows all languages of music and is truly an artist’s delight.

To quote Mr. Ramesh Swamy, principle Organizer of the SGBS Trust, Bengalooru which had hosted her concert on 8th August, “The hall was overflowing, the first floor, the basement and so also outside. They love Sudha’s music and besieged her for over half an hour after the concert, seeing, speaking, reaching out and asking for autographs, for which she patiently obliged all. Sudha has donated 12000/- from her Samudhaaya Foundation to our Unnati Trust for Annadhanam. During the interlude when I spoke about Unnati and the work that we are doing, to the audience, we also auctioned a few of her personalized autographed notepads for the cause, which fetched 3000/- which she again donated to Unnati…Sad that there were such few notepads…the audience was waiting to ‘take and give’! Sudha is indeed the topmost in the rung of musicians – in her capacity as a musician par excellence, coupled with a philanthropic bent of mind. She is a good well wisher of Unnati and has supported us for many years”