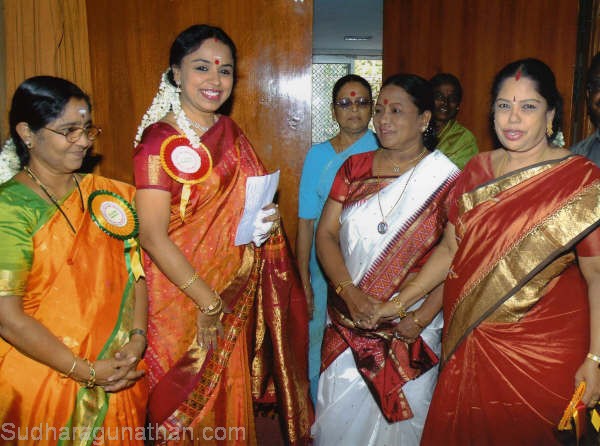 The stream of visitors to Sudha’s home and a host of others who were in touch with her for various reasons, during the month of February, found her very excited and, at times, a little high strung. All guesses lead to just one road…yes; it was Sudha’s novel venture that she, as President of the Tamil Nadu Chapter of the International Tamil Centre, chose to undertake – bringing together of 1330 school children to sing couplets from the Thirukkural, all at the same time in one forum…..mind boggling! What an onerous task…but the fruits of it was worth every minute of hard work by the students, the teachers and Sudha and her dedicated team members.

The International Tamil Centre had a galore of programs that commenced from 9.30 am on 23rd February, 2008 and went on until 9 pm. Debates, discussions, poetry, mimicry, music, dance….a host of activities all revolving in and around the beautiful language of Tamil. In praise of Tamil, in praise of the Tamil poets and pundits, in praise of the propagators and cultural ambassadors, who, across the world, in different countries, are working tooth and nail to keep the flag flying and to ensure that the Tamil language and culture continues to reign supreme and regale the world…. and the Gods!

The guest list for the various programs, the conveners and the participants included a host of dignitaries and Tamil lovers such as Prof. Dr.Meer Mustafa Hussein, Sri.AVM Saravanan, Smt.Manorama, Dr.J.G.Kannappan, Sri.Avvai Natarajan, Sri MAM Ramaswamy, Sri. Nalli Chettiar, Sri. Murali, Smt. Kanimozhi Karunanidhi, Kumara Rani Meena Muthiah, Sri.S.M.Idayathullah , Sri.R.Gandhi and many more (the invitation for the program has been displayed for reference).

This feature aims to focus more on the humungous effort and outcome of a stellar activity spear headed by Sudha – the brilliant team effort of 1330 school children, in singing some couplets from the Thirukkural. On one platform, in one language, in unison, in perfect harmony, with one soul to reach one goal…..to highlight the gems in our Tamil heritage. They did it….and what an awesome sight it was… It only ushered the message to the rest….to focus and foster work on keeping the Tamil culture and the Tamil flag flying high everywhere and every time…..! The pictures alongside depicts the various moods and moments of the show and they are all self explanatory…

The auditorium at Chettinad Vidyashram, Chennai, which played host to this spectacular show, was filled to capacity. The school children, who had assembled, welcomed Smt. Kanimozhi who walked in with Sudha, with cheers, abundant in warmth and affection. The Chief Guest reciprocated with equally spirited gestures and thus commenced the evening for this memorable show. The students, guided by their teachers and Sudha began the chanting and the walls reverberated with Tiruvalluvar’s gems, strumming a chord outside and striking a chord within! The dignitaries assembled on the dais were visibly moved by the magnitude of the effect and the dedication in execution – by the students, teachers and by Sudha herself. To quote Kanimozhi (translated from Tamil)….’I have been listening to the Kural right from my childhood and never has it had this kind of an impact on me…it’s actually given me goose pimples…!” Sri Murali, in his speech said “Thiruvalluvar must be smiling from above and showering his blessing on each of the children, completely overwhelmed at their vibrant singing!”

Long live Tamil and kudos to Dr.Winston Panchaksharam, Sudha Ragunathan, Manimekalai Kannan and their team of stalwarts, for having taken up the task of spreading the magnificence of this beautiful language called ‘Tamizh’ and ensuring that it lives until eternity.